After coming to the throne, in 1659 A.D., Aurangzeb proscribed the use of the ‘Kalima’ on his coins. Accordingly the ‘kalima’ was withdrawn from the Indian coins. He established his own preferences on the coins that were issued during his ruling period. 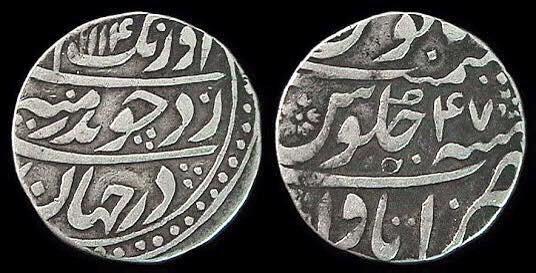 The coins of Aurangzeb bore his name and title ‘Abu-al-zafar Muiuddin Muhammad Bahadur Shah Alamgir Aurangzeb Badshah Ghazi’ on the obverse side of the coin during the early years of his ruling period. Later he introduced a couplet which was composed by Mir Abdul Baqi Shahbai. The couplet came into use at different dates at different mints. Except from Akbarabad, the couplet was used by all mints and continued till the end of reign. The couplet was adopted by Akbarabad very late. The square area like Shah Jahan’s coins was used during the early years at Akbarabad and Junagarh. Aurangzeb introduced a separate formula, which carried ‘Sanh julus Manus zarb‘ with the name of the mint. The connotation of this phrase was “struck at (mint’s name) in the year (regnal year) of the accession associated with prosperity.”

In comparison to the copper coins issued during the time of Shah Jahan and Jahangir, copper coins of Aurangzeb stood with a distinct characteristic. His coins were issued in the ‘dam’ (a small Indian coin) weight till the fifth year of his reign. As per the historical evidences, the weight of the coins was reduced perhaps due to the rise of the metal price during that time. Aurangzeb’s coins in copper bore on the obverse, variously, ‘Fulus Badshah (or Shah) Alamgir, Fulus Alamgiri, Fulus Aurangzebshahi, Aurangzeb Alamgir, Sikka Mubarak julus. The reverse side of the coin had the mint name. The largest number of places was known to have issued the coins of Aurangzeb. The places like Ahmedabad, Akbarabad, Akbarnagar, Azimabad, Bijapur, Burhanpur, Gulbarga, Hyderabad, Cuttack, Lucknow, Shahjanabad, Sholapur, Surat, Ujjain etc issued coins of gold, silver and copper metals. Moreover, copper coins were exclusively known from Aurangnagar, Bairat and Udaipur.

It had also been considered that the coins that were issued in some of these places were not the imperial issues but they had been issued by the local authorities without any imperial sanction. 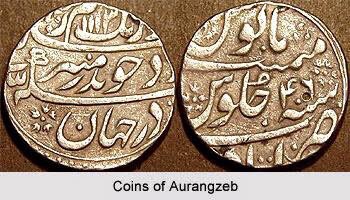 The coins of Aurangzeb were noted for the distinct features he employed during his reigning period. Aurangzeb was followed by his successors for the inscriptions of their coinage.

They adopted uniformly on the reverse the formula ‘Sanh julus maimanat Manus’ with the mint name and the regnal year. There was a common pattern for the obverse, which began with the words ‘Sikka mubarak’ (auspicious coin) followed by the name of the king and ended in ‘Badshah Ghazi’. At times, the successors of Aurangzeb preferred to add some couplet on the obverse side of the coin in place of the set pattern of the coins.