After the recall of Shaista Khan as the Subadar of the Deccan and the sack of Surat by Shivaji in 1664, Aurangzeb selected one of the best generals, Mirza Raja Jai Singh. He was appointed as the viceroy of the Deccan. He was accompanied by such renowned generals as Daler Khan Rohilla, Dawar Khan Qureshi and others.

Mirza Raja Jai Singh, on reaching the Deccan, with the true eye of a general, established military outposts in different directions and ordered that the main land of Shivaji be attacked and devastated. Shivaji took shelter in the fort of Purandhar. Jai Singh ordered the fort to be besieged and Daler Khan was appointed to carry on the siege. Because of the repeated military success of Jai Singh and the complete devastation to the main land of Shivaji, all military efforts of Shivaji were paralysed. Shivaji was convinced that the

fort would be captured and he would be arrested. He thus sued for peace and wished to pay a visit to Jai Singh to negotiate the peace terms. Shivaji had also a reputation of attacking the enemy on the pretext of offering gestures, as with Afzal Khan, the general of Bijapur. Jai Singh granted an interview and all precautionary measures were taken. Shivaji came to the tent of Jai Singh and Jai Singh gave signal to Daler Khan to capture the Fort of Purandhara to show that the Mughals had sufficient force. Shivaji got demoralised and agreed to all the terms proposed by Mirza Raja Jai Singh and a treaty was signed in 1665 which is known as the Treaty of Purandhar. 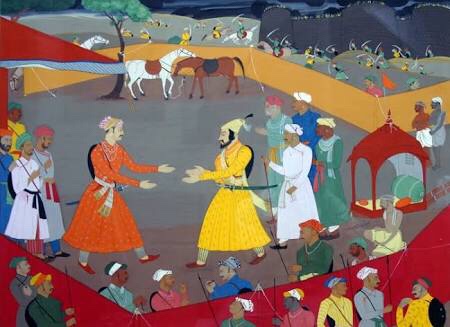 The Treaty of Purandhar and its Clauses

The conditions of the treaty were:

(a) Out of 32 forts, Shivaji would surrender 23 to the Mughals. Shivaji agreed.

(b) 2/3rd of the territory of Shivaji was seceded to the Mughal Empire.

(c) Shivaji agreed to accept the overlord ship of the Mughals and accept a mansab. His son, Sambhaji was given a rank of 5000/5000.

No Mughal general had succeeded in concluding such a treaty with Shivaji showing immense superiority of the Mughals.

Now the real problem started. The real problem now was that Jai Singh was convinced that with the help of Shivaji and his Maratha contingents, the states of Golkunda and Bijapur could be easily taken in the Mughal Empire. If these two were to be annexed and directly controlled by the Mughals, Jai Singh said, the Marathas could play a role as the Rajputs played in North India. So what Jai Singh visualised was that not only would it be easy to annex Golkunda and Bijapur but also to administer it.

He wrote a number of letters to Aurangzeb [Haft Anjuman] in which he argued to adopt a forward policy towards the Deccan and pleaded that in the frame work of the Mughal Empire, the Marathas should have the same position as the Rajputs had in the North. In anticipation of the approval to be obtained, Jai Singh advanced his forces into the territory of Bijapur and occupied Kalyani, the first outpost. In these military preparations he spent around one crore of rupees from his own expenses. He also wrote that if Bijapur was annexed, ten times more would be got in addition to vast territories. Jai Singh emerged as the champion of the Forward policy in 1666; and repeatedly wrote to Aurangzeb for the annexation of Golkunda and Bijapur.

Aurangzeb ordered the withdrawal of the forces from Kalyani. Jai Singh resented this withdrawal and when he showed his resentment, Aurangzeb censored him. Jai Singh mad a pathetic appeal of having served the grandfather, father and now you, fighting in Balkh and Qandahar and now to be humiliated! He died of heart attack due to this humiliation.

So the most brilliant career came to an end abruptly. Now the most pertinent question is: why Aurangzeb forgot his own arguments within 10 years? When there was no substantial change in the geo-political structure during this phase.

But for Shahjahan or Aurangzeb, as an emperor, Deccan was one of the 22 provinces of the empire and not the only one. Any policy to be formulated regarding Deccan, the repercussions had to be closely examined. Both Shahjahan and Aurangzeb as emperor were convinced that expansion meant bulk of military and adverse effects on the Mughal Empire.

This explains the reluctance of Aurangzeb to get involved in the Deccan: a point which he could see as an emperor, and could not understand as the subahdar. Any action adversely affecting other provinces was not worth taking.