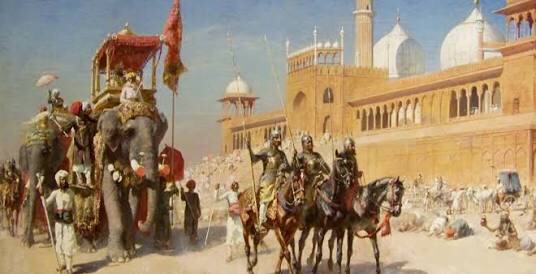 The first and foremost among them is the thesis put forward by Satish Chandra in his Parties and Politics of the Mughal Court (1959). He build up the hypothesis of a Jagirdari Crisis. According to him, the crisis was (a) contracting hasil from the mahāls; (b) an increase in the number of total mansabdars; and (c) a general tendency to allot increasingly high mansabs. All this, according to Satish Chandra led to a state of bejāgīri.

This thesis was further elaborated by M. Athar Ali (Mughal Nobility under Aurangzeb [1966]), who made a count of the nobles in the Mughal Empire. According to his count of nobles of the rank of 1000 and above, the percentage of the khānazāds and the Rajputs started falling, while the Deccanis and the Marathas was growing. In other words, there took place a basic change in the composition of the nobility as such. According to Athar Ali, there were only 17 nobles of the rank of 1000 and above under Akbar. This number increased to 486 by the beginning of Aurangzeb’s reign. By the end of Aurangzeb’s reign the figure rose to 575. All this, according to him led to a crisis in the empire.

Further improvements were made in this thesis by J.F. Richards who pointed out that the state of bejāgīrī was caused by a deliberate policy of increasing the share of the khalisa revenues, and by not assigning jagirs in pāibāqi by Aurangzeb in the Deccan. This resulted in a further clamour for jagirs by the nobles and the concentration of more funds with the government from 1687 onwards.

The second major theory of the Aligarh School was built by Irfan Habib in his Agrarian System (1963). He built up the hypothesis of an ‘Agrarian Crisis’. He tries to work out the causes of the decline of the Mughal Empire in a class framework which does not stop simply at identifying the classes but extends to identify the Mughal state as ‘the protective arm of the exploiting class’. He illustrates the basic nature of the Mughal land-revenue demand. The Mughal jagirdari system according to him contributed to a cash nexus and stimulated town-based crafts. Habib implicitly highlights a number of social contradictions in the society controlled and managed by the Mughal Empire. Thus he points out the contradiction between the village headmen, the peasant proprietors and menial workers on the one hand and the nobility on the other. He also points out at the intra-ruling class contradictions: the zamindars and the intermediary zamindars on the one hand, and the nobility on the other. He also takes into account the contradictions between the muqaddams and the ordinary peasants, and between the ordinary peasants including the muqaddams and the menial classes. He in fact is rejecting Marx’s thesis of self-sufficiency of Village Communities. Then he goes on to discull the peculiar working of the Jagirdari system. For this he takes the evidence from whole of the century, viz. the evidence from St. Xavier’s account of 1609, Bernier’s comments on the permanent or impermanent interests of the mansabdars in jagirs and their frequent transfers, as also the account of Bhimsen.

The basic features of this ‘Agrarian Crisis’ as propounded by Irfan Habib are: (a) high rate of demand built in the zabt system (more than half of the actual produce); (b) increasing gap between the actual hasil and the expected jama; (c) rotation of jagirs, pressurising the peasants and ruination of agriculture; (d) ruination and flight of peasantry from the jagirs, which affected the zamindars also as they were closely linked to the Village Community; and (e) breakout of agrarian revolts which were manifestations of peasant discontent.

This agrarian crisis, Habib holds, gave rise to the Jagirdari Crisis. This point is missed in the theories of Satish Chandra and Athar Ali.

From these formulations, as well the work of Noman Ahmad Siddiqui (Land Revenue Administration under the Mughals, 1970) it is possible to draw, as Peter Hardy points out, a diagram of tensions between monarch (padshah), military or service noble (mansabdar), landholder (zamindar), and peasant (raiyat) which, when maintained in equilibrium, were creative of order and stability, but which if allowed to pull free were creative of disorder and impotence. Such a free pull occurred when the Marathas as zamindars forcibly jerked against the bit of Mughal control and resisted domestication within the Mughal system. The efforts of the Mughals to muster the resources in revenue and men to overcome the Marathas led to strains within the nobility, and insupportable pressures upon both zamindars and peasant who – if they did not revolt actively – at least resisted the Mughal revenue collector passively. A combination of over-lavish appointments by the emperor and the military successes of the Marathas created a condition of bejagiri. Thus, the resources which were essential for the support of the contingents were rendered inadequate and thus the number of effective Mughal contingents fell and the Mughal military machine became progressively incapable of controlling the ever rising military and rural aristocracy.